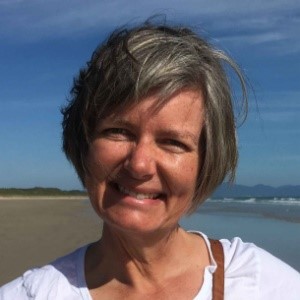 Jeannie is a graduate of University of Melbourne Faculty of Music, and Victorian College of the Arts (B.Mus.Ed; Dip Opera/Music Theatre). Awards, grants and scholarships enabled her to continue her studies in Italy and the UK. For over 35 years, Jeannie’s career has combined her passions for singing, community arts, and music education.

Jeannie has sung as a soloist with companies including Victoria State Opera, Chamber Made Opera, ABC Radio, Melbourne Theatre Company, International Arts Festivals in Melbourne, Brisbane, Sydney, and Adelaide. She has toured in Europe and Asia, and sung in new opera projects with Royal Opera House Covent Garden.

Jeannie has always had a strong commitment to the music of Australian composers, and in 2004 she received an APRA/Australian Music Centre award for her “long-term contribution to the advancement of Australian music”. Her long collaboration with guitarist Ken Murray led to their CD Madrugada (music by Australian and Latin American composers), and cabaret act Dry Martinis. In 2003 Jeannie produced and performed in critically-acclaimed new opera Love, Death, Music and Plants – a musical infringement on the life of Baron Ferdinand von Mueller (by Brian Lipson and Matthew Hindson, produced in collaboration with Royal Botanic Gardens Melbourne).

Jeannie has been Artistic Director, composer, Music Director and performer in large projects such as Serenading Adela: A Street Opera (2018).

She worked extensively with Canto Coro community choir from 1995 – 2003 on the development and performance of new choral music-theatre shows (including Little City and 1975).

Jeannie has worked on many projects with Dandenong Ranges Music Council, including Ballad of Birdsland (2000) and the Breast Beaters music and health film (2015).

Since 2011 Jeannie has been focusing on working with a wide range of choirs. She began three Melbourne community choirs in 2016, which have been keeping her busy as Musical Director ever since: ZING! Sing in Dutch, Climate Choir Melbourne, and Elwood Community Choir.

Jeannie has also taught at the University of Melbourne, Deakin University, the Victorian College of the Arts, music colleges in Adelaide and Hobart, and worked at the Victorian Curriculum and Assessment Authority.

Jeannie has been an Artist in Residence at two creative arts centres in NSW: Mirramu in 1996, and Bundanon in 2013. In 2014 she was a Composer in Residence at Visby International Composers’ Centre in Sweden.